So You Think You Can Dance - 11xwhatever "Wherever I Left Off"

Circumstances have, over the last number of weeks, led me to the official Fox Youtube account to watch the routines. If you've never had the pleasure, the official account just shows the routine -- no rehearsals prior, no judges' comments afterwards. The experience of watching the performances in isolation is disorienting, not to mention time-saving -- I can finish an episode's worth of routines in half an hour! -- that the absence of all of the show's ancillary stuff feels so much more acutely missing. With so many packages and so much content devoted to things other than the actual depiction of dance, you could say that dance interrupts all the other reality-tv goings on, much like the song interludes in a musical.

I'd even go so far as to conclude -- polemically -- that SYTYCD isn't even about dance (at least not anymore), and that rather it's an exercise in finding appealing bunch of kids who are willing to play by an arbitrary set of rules in the hopes of getting audiences to vote for them (and since voting now takes place entirely through an app, the cynic in me wonders how much of SYTYCD has become an excuse in data mining, much in the same way that tv content was created to sell ads). That is, it's first and foremost a reality tv show -- one punctuated by dancing -- and that its narrative is propelled by other tangentially related matters. Then, in a Zizekian maneuver, I'd claim that its blatant Emmy-chasing (which, already being a non-entity in terms of granting critical recognition to the tv industry, is even more vapid as an arbiter of dance) is a symptom that's meant to cover up its lack, a shameless search for validation of what it's abandoned. 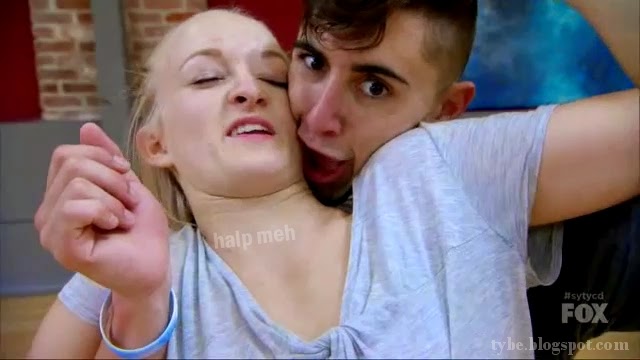 Whenever I'm talking with someone new for the first time and the conversation reveals my affinity for reality tv, I'm often asked what I think about American Idol, and my witty rejoinder is always, "I don't watch Idol because I like music." I'm beginning to wonder if SYTYCD is reaching that point for me and dance, since I've been bumping uncomfortably against the show's cramped depiction of dance for multiple seasons now.

To borrow another reality program (Project Runway), my thoughts about this show have been circling around its taste level. Designers who have technical knowledge but no or ugly design flair get called mere seamstresses, and SYTYCD seems to fill its cast with the dance equivalent: kids who can turn a billion times but whose face is fixed in a plastic rictus and/or otherwise lack a distinctive point of view from which they approach their chosen art.

I'm obviously talking about Casey, whose balletic abilities, marvelous as they are, don't seem to operate on a level of emotional interpretation, from song choice to solo choreography to the performance thereof. Contrast his solo with Emily's, who seems to dance in a space where the artistic signifiers are more available: dancing to a modern classical piece (originally commissioned by my new choreographic crush!) with choreography that isn't just a series of tricks performed with greater subtlety and delicacy. (I'm trying not to place too much emphasis on choreography, which can be a product of access to choreographers as much as a sign of ineffable artistic vision-- i.e. not all dancers are choreographers, much less self-choreographers.)

Of course, this kind of a discussion has no end point beyond polemics, and I rather dislike intense arguments about what are essentially matters of taste, so I'll end there (and which is why I'm trying to use more neutral language to explain why I prefer Emily's solo to Casey's). (Furthermore, the qualities I mention can all be taken as signs of middlebrow, which can be a more offensive aesthetic allegation.)

Emilio and Bridget - Jazz
Not bad on all counts. Emilio doesn't finish his lines, but he looks very comfortable when the music gives him a pulse to work with. And thankfully, the choreography is Ray Leeper, not Ray Creeper.

Jacque and Zack - Paso Doble
I have to say that a paso set to Rob Zombie's "Dragula" was good for a laugh, though Zack hits a lot of the right paso notes. In terms of the taste discussion above, this routine is an interesting example of personal history determining reception -- having grown up on mid- to late-'90s alt rock radio, I'll react much more positively to post-Marilyn Manson horror schlock nostalgia than to the emotional schlock of a Celine Dion song.

Serge and Carley - Quickstep
I don't know what compels me to comment on this routine -- Serge doesn't seem to have spent a whole lot of time doing standard judging by this routine, though all else considered his performance is a good effort -- but I guess I've become a sucker for quicksteps that throw in vernacular jazz and Charleston elements.

Rickey and Valerie - Hip Hop
Those Academy of Villains sure like their makeup, but it's all good as far as breaths of fresh air go. And as far as prodigiously talented modern/lyrical dancers go, I'm impressed with Rickey's acquittal in hip hop -- he could dance with a heavier load in his pants (in a manner of speaking), but he gets down pretty well. And oh yeah VALERIE'S LEG WAVE??

Similarly, Travis's boys routine earns back some of the plaudits that are impulsively heaped his way, with a handful of nearly stellar moments -- the various wave formations, the scream that disturbs the equanimity of the song -- that add up to that last indelible image of the guys falling off the stage.

Finally, if we're definitely going to have Mandy Moore choreograph a group routine, just for a change of pace, I'd rather see her do something for the boys rather than an iteration of girls being ethereal sylphs.


Alas, my brilliant idea of putting Teddy in a routine set to a David Bowie song, conveyed to the brains of the show, will now never come to pass.

But on the bright side, Tanisha is now freed from Rudy.

And as far as the all-star announcements go, I'll say that I'm a bit disappointed that Comfort isn't on for this week at least -- however overused she might be, she is still a remarkable dancer -- but with Jasmine Harper, they've finally found an all-star that can carry her own weight in hip hop (unless they decide to bring Witney in as a hip-hop all-star).
Posted by Leee at 8:45 PM 1 comment:

Remember when I was literally sick and tired last week? As it turns out, I've been suffering fro pneumonia, but strangely enough, I have more to say than last week, even based solely on first impressions.

Emilio & Footman - Contemporary
This was diverting, though if I'm in the mood for random cross-season comparisons pulled out of thin air, Bridget has been reminding me of Jordan Casanova -- technically capable, but not an expressive performer.

Ultimately, though, this routine is most memorable, for the Rube Goldbergesque contortions required to get Emilio in a penché.

I've literally been sick and tired this past week, so I'll just say that I'm shocked -- shocked -- that the oldest remaining female contestant was eliminated. To paraphrase some movie, I get older, SYTYCD contestants stay the same age.

When the judges talk to Serge, they usually mention how he's a hard worker, which at the time struck me as oddly conspicuous. Later I remembered that that's the same faint praise that they give to Maks/Max from season 5, who of course lasted all of two weeks. Since he landed in the bottom already, and considering his advanced age, I wouldn't be surprised if Serge doesn't last much longer.
Something else: Nigel dings Marlene for not being sufficiently flexible, but aims no such criticism at Serge, who also seems to not have the bendy parts of, say, Ricky.


Teddy is phenomenal in his routine -- he's all brilliant elasticity and sharp, stuttering angles -- and Emily does better with her hip hop than does Footman, who flashes some of the power and confidence needed in hip hop only in between moves and is self-consciously floating the rest of the time.

Something I noticed last week but couldn't be bothered to remember till now is Teddy's resemblance to a certain glam rocker.
Read more »
Posted by Leee at 6:49 PM No comments:

With the exception of one routine, the showcase extinguished the hope I'd built up during the auditions. Make room for me, Anthony Morigerato and your polite golf clap.

Hope springs eternal, even after an initial bout of disillusionment: I'm cautiously optimistic about the coming season (ballet!), even though I'm disappointed, first, that certain dancers didn't make the top 20, and second, that this cast has a few warnings flags.

With 157 dancers to dispense with in a space of 80+ minutes and instructions to build up arcs for specific dancers, a significant number of them will get short shrift. (To put the time-crunch in perspective, if every dancer got the same amount of screentime, that'd amount to about 2 minutes per person, so every additional minute devoted to Jessica Richens' or Steven Kador's travails drains the pool of available screen time quickly.) All the same, seeing Justine Lutz buried in the episode -- well, not seeing is a more apt phrase -- makes her sudden cut an especially acute one; Amir Sanders isn't even mentioned (though we see her unmistakable 'fro at the beginning), and if Cristina Moya-Palacios got any screentime, then I must've blinked. We see Shafeek Westbrook struggling in the jazz round and then giving a much more gracious sendoff than last time; Erik "Silky" Moore is perhaps a spectral presence only until he becomes the last Green Mile cut. I don't think I've had this many would-be favorites heading into a callback before, and seeing so many of them fall by the wayside is dispiriting.

The warning flags of the cast come down to the racial composition on the girls' side: an initial glance suggests that they're all white. Racial diversity has rarely been a problem on the guys' side, and every prior season has featured at least one woman of color (though the ethnic diversity doesn't measure to the guys' side). But this development might not be all that surprising if we take stylistic representation as a proxy among the women. When women are overwhelmingly labeled as contemporary/jazz -- even when they have hip-hop backgrounds (e.g. Donyelle, Karla Garcia, and Jasmine Harper), contemporary/jazz trumps -- I don't think that the leap to an all-white cast is that far behind. I've mentioned before about such skewed representation: they give young girls a very limited scope of acceptable femininity is, certainly as far as dance goes (contemporary or gtfo).

Another warning flag is the average age of the cast, though believe it or not, the boys this year are younger, with an average of 19.9 against the girls' 20.4. Some of the boy choices are particularly glaring in this regard, especially with selecting the baby-faced Nick Garcia as a ballroom guy over a much more physically mature Armen Way. (Serge does have a more prototypical ballroom physique, though Marcquet is a lot more lean and I chalk up his inclusion because of what I hear is his facility with hip hop, also, African-American ballroom dancer.) If we assume all other dance qualities being equal, why pick Nick over Armen? The way that castings go nowadays, I doubt that Pasha -- the go-to male ballroom All-Star -- would make the cut.

On a related note, this cast does feature more Latin dancers this year than they've ever had, I think -- perhaps a belated response to DWTS encroaching on SYTYCD's territory by having non-ballroom styles on the show (particularly contemporary)?

Add to Any Widget